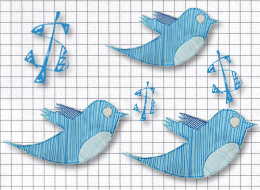 Recently, two Hewlett Packard scientists developed an algorithm that projected movie sales with 97% accuracy based on Twitter chatter alone. Inspired by this and other recent social media studies, my staff and I decided to conduct some social media research of our own to see if Twitter chatter sells books.

As promised in my previous post, I would like to share the preliminary findings of our research based on the perceived correlation between Twitter chatter and Amazon rankings. First, we began exploring the types of social media search tools that are now available. We discovered some fantastic applications, such as Addictomatic and Topsy, but eventually chose TweetReach to conduct our research. TweetReach searches Twitter chatter, allowing you to see how many tweets have spread on Twitter and how many users received tweets about your topic.

During recent publicity campaigns, we started to notice a relationship between TweetReach numbers and Amazon rankings (most of the tracking was done on paper books, we are now tracking both paper and Kindle versions and I'll give you an update on that in a couple of months). We were excited and began to do more research.

After tracking over 20 books during a 6 month period, we realized that the correlations are there but they are unpredictable. There were certainly times when high Tweet Reach numbers impacted Amazon rankings (Twitter chatter sold books), but unfortunately there were just as many times when they did not. Like any research with a wide range of variables (demographics, subject matter, relevance, quality, reputation, activity level of authors, etc.) it is too early to draw absolute conclusions. What we can say with confidence is that being active on social media sites has great benefits for branding as well as spreading word of mouth.

At FSB, we begin each publicity campaign with a detailed "web snapshot" of a client's brand. With this preliminary research, we glean an overall, holistic understanding of where a particular author is in terms of their platform online. We note their blog, how many followers they have on Facebook and Twitter, and what links are listed on the first page of a Google search for their name.

What we have noticed over and over again is that active authors have dynamic Google page results. Authors that are not engaged in online brand building have a static Google search page often populated by outdated content and database links. We also saw that social media "sharing" is key to driving traffic to guest blogs, reviews, interviews and even in-person events.

As a result of these findings and our ongoing research, the daily mantra at FSB has evolved into: "If it can't be shared, it shouldn't be done!" Essentially, we have adapted our decision-making and productivity to ensure that each publicity hit/placement will be shared to create a viral effect, which benefits our clients' brand visibility and help us sell books. Many sites, such as Huffington Post and Oprah.com make it very easy for readers to share and spread information by utilizing one click sharing. With this application, hitting the re-tweet button or Facebook share or like button will immediately disperse that information to member's social networks.

By now, we know that social media participation is a crucial aspect of any publicity strategy. Reviews, guest blogs, interviews all lend credibility to the topic and authors, but it is also necessary to develop different forms of content, such as videos, slideshows, and articles, to successfully promote books. Additionally, posting content daily is essential for gaining and maintain followers.

We are well aware of the fact that every voice adds to the chatter and, with each bit of shared information, the bigger picture begins to unfold. Because word of mouth on Twitter spreads very quickly, "you have to be in it to win it." I urge authors, publishers and publicists to start the chatter! Make sure you have a variety of social outlets where you can share information, grow the visibility your features and share your successes.

Have you personally experienced the effects of viral media? How has it positively impacted your work, your brand, or sales?
Prev Next